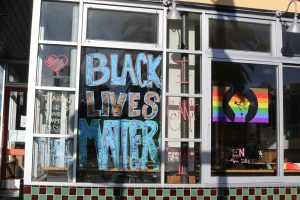 The death of George Floyd prompted weeks and months (still continuing) of protests by those who want to bring awareness to racism and inequity. The following curated articles from news sites and online magazines provide starting points to learn more about the various ways in which outright systemic racism and/or marginalization of Black, Indigenous, and Asian people permeates all aspects of culture and society. Contemporary articles from more credible popular sources are loosely organized under general categories:

Black women saved the Democrats. Don’t make us do it again. by Taylor Crumpton

How Indigenous voters swung the 2020 election by Anna V. Smith

“A Look Back At Trayvon Martin’s Death, And The Movement It Inspired” by Karen Grigsby Bates

“The Bad-Apple Myth of Policing” by Osagie Obasogie

“Stanching the School-to-Prison Pipeline” by Mimi Kirk and Citylab

“The Secret List of Convicted Cops” by Robert Lewis and PRX

“Disband the police force? Here’s one U.S. city where the idea has been tried” by Alexander Panetta

“The Failure of Race-Blind Economic Policy” by Adia Wingfield

“The Unfulfilled Promise of Fair Housing” by Abdallah Fayyad

“Stop Blaming Black People for Dying of the Coronavirus” by Ibram X. Kendi

“‘I Will Not Stand Silent.’ 10 Asian Americans Reflect on Racism During the Pandemic and the Need for Equality” by Anna Purna Kambhampaty

“What Anti-racist Teachers Do Differently” by Pirette McKamey

Standing Up, Speaking Out for Racial Justice by Belinda Daughrity

The Weaponization of Whiteness in Schools by Coshandra Dillard

“From Slavery to Colonialism and School Rules, Navigating the History of Myths about Black Hair” by Hlonipha Mokoena

“Let’s Take the National Anthem Literally, and the Songwriter at His Word” by Martenzie Johnson

“I Will Not Argue About the Confederate Flag.” by Kevin Gannon

“The history of ‘Lift Every Voice and Sing,’ the Black anthem being played at NFL games” by DeNeen L. Brown

“What Is White Privilege, Really?” by Cory Collins

“How to Deal with Racist People” by Jens Korff

“Appropriation of Indigenous Culture in the Fashion Industry” by Annelise DeRoche

“Jesus wasn’t white: he was a brown-skinned, Middle Eastern Jew. Here’s why that matters” by Robyn J. Whitaker

“‘I’ll be fierce for all of us’: Deb Haaland, first Native American named interior secretary, accepts nomination” by Shweta Sharma

“Asian Americans Are Still Caught in the Trap of the ‘Model Minority’ Stereotype. And It Creates Inequality for All” by Viet Thanh Nguyen

“The Movement for Black Trans Lives” by Jon Allsop

Contemporary Issues & Popular Articles by Amy Minervini is licensed under a Creative Commons Attribution 4.0 International License, except where otherwise noted.