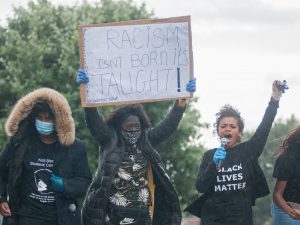 The year 2020 was marked by protests sparked by the murder of George Floyd. These protests were focused on highlighting police brutality and systemic racism. However, the fight for racial equity has been happening for decades. Use the curated sources below, listed in no particular order, as a jumping off point to help learn more about the long road suffered, sacrifices made, and continual battle against racial injustice:

The Murder of Emmett Till

The Murder of Medgar Evers

No Justice, No Peace

Doctrine of Discovery & Its Repudiation

Key Figures, Moments & Movements by Amy Minervini is licensed under a Creative Commons Attribution 4.0 International License, except where otherwise noted.