In the workplace, you want to present a professional image. Your outfit or suit says something about you when meeting face-to-face, and your writing represents you in your absence. Grammatical mistakes in your writing or even in speaking make a negative impression on coworkers, clients, and potential employers. Subject-verb agreement is one of the most common errors that people make. Having a solid understanding of this concept is critical when making a good impression, and it will help ensure that your ideas are communicated clearly.

Agreement in speech and in writing refers to the proper grammatical match between words and phrases. Parts of sentences must agree, or correspond with other parts, in number, person, case, and gender.

Subject-verb agreement describes the proper match between subjects and verbs.

Add an -es to the third person singular form of regular verbs that end in -sh, -x, -ch, and -s. (I wish/He wishes, I fix/She fixes, I watch/It watches, I kiss/He kisses.)

Singular: My mother walks to work every morning.

Plural: My friends like the same music as I do.

Many singular subjects can be made plural by adding an -s. Most regular verbs in the present tense end with an –s in the third person singular. This does not make the verbs plural.

On your own sheet of paper, write the correct verb form for each of the following sentences.

Not all verbs follow a predictable pattern. These verbs are called irregular verbs. Some of the most common irregular verbs are be, have, and do. Learn the forms of these verbs in the present tense to avoid errors in subject-verb agreement.

Study the different forms of the verb to be in the present tense.

Study the different forms of the verb to have in the present tense.

Study the different forms of the verb to do in the present tense.

Complete the following sentences by writing the correct present tense form of be, have, or do. Use your own sheet of paper to complete this exercise.

Errors in subject-verb agreement may occur when

Compound subjects combined with and take a plural verb form.

Compound subjects combined with or and nor are treated separately. The verb must agree with the subject that is nearest to the verb.

If you can substitute the word they for the compound subject, then the sentence takes the third person plural verb form.

Separation of Subjects and Verbs

If you have trouble finding the subject and verb, cross out or ignore the phrases and clauses that begin with prepositions or dependent words. The subject of a sentence will never be in a prepositional phrase or dependent clause.

The following is an example of a subject and verb separated by a prepositional phrase:

The students with the best grades win the academic awards.
The puppy under the table is my favorite.

The following is an example of a subject and verb separated by a dependent clause:

The car that I bought has power steering and a sunroof.
The representatives who are courteous sell the most tickets.

Indefinite pronouns refer to an unspecified person, thing, or number. When an indefinite pronoun serves as the subject of a sentence, you will often use a singular verb form.

Singular: Everybody in the kitchen sings along when that song comes on the radio.

The indefinite pronoun everybody takes a singular verb form because everybody refers to a group performing the same action as a single unit.

Plural: All the people in the kitchen sing along when that song comes on the radio.

The indefinite pronoun all takes a plural verb form because all refers to the plural noun people. Because people is plural, all is plural.

Singular: All the cake is on the floor.

In this sentence, the indefinite pronoun all takes a singular verb form because all refers to the singular noun cake. Because cake is singular, all is singular.

Singular: The class is going on a field trip.

In this sentence, class is a collective noun. Although the class consists of many students, the class is treated as a singular unit and requires a singular verb form.

The Subject Follows the Verb

You may encounter sentences in which the subject comes after the verb instead of before the verb. In other words, the subject of the sentence may not appear where you expect it to appear. To ensure proper subject-verb agreement, you must correctly identify the subject and the verb.

In sentences that begin with here or there, the subject follows the verb.

Here is my wallet!
There are thirty dolphins in the water.

If you have trouble identifying the subject and the verb in sentences that start with here or there; it may help to reverse the order of the sentence so the subject comes first.

My wallet is here!
Thirty dolphins are in the water.

When you ask questions, a question word (who, what, where, when, why, or how) appears first. The verb and then the subject follow.

Who are the people you are related to?
When am I going to go to the grocery store?

If you have trouble finding the subject and the verb in questions, try answering the question being asked.

Correct the errors in subject-verb agreement in the following paragraph. Copy the paragraph on a piece of notebook paper and make corrections.

Dear Hiring Manager,
I feels that I am the ideal candidate for the receptionist position at your company. I has three years of experience as a receptionist in a company that is similar to yours. My phone skills and written communication is excellent. These skills, and others that I have learned on the job, helps me understand that every person in a company helps make the business a success. At my current job, the team always say that I am very helpful. Everyone appreciate when I go the extra mile to get the job done right. My current employer and coworkers feels that I am an asset to the team. I is efficient and organized. Is there any other details about me that you would like to know? If so, please contact me. Here are my résumé. You can reach me by e-mail or phone. I looks forward to speaking with you in person.
Thanks,
Felicia Fellini 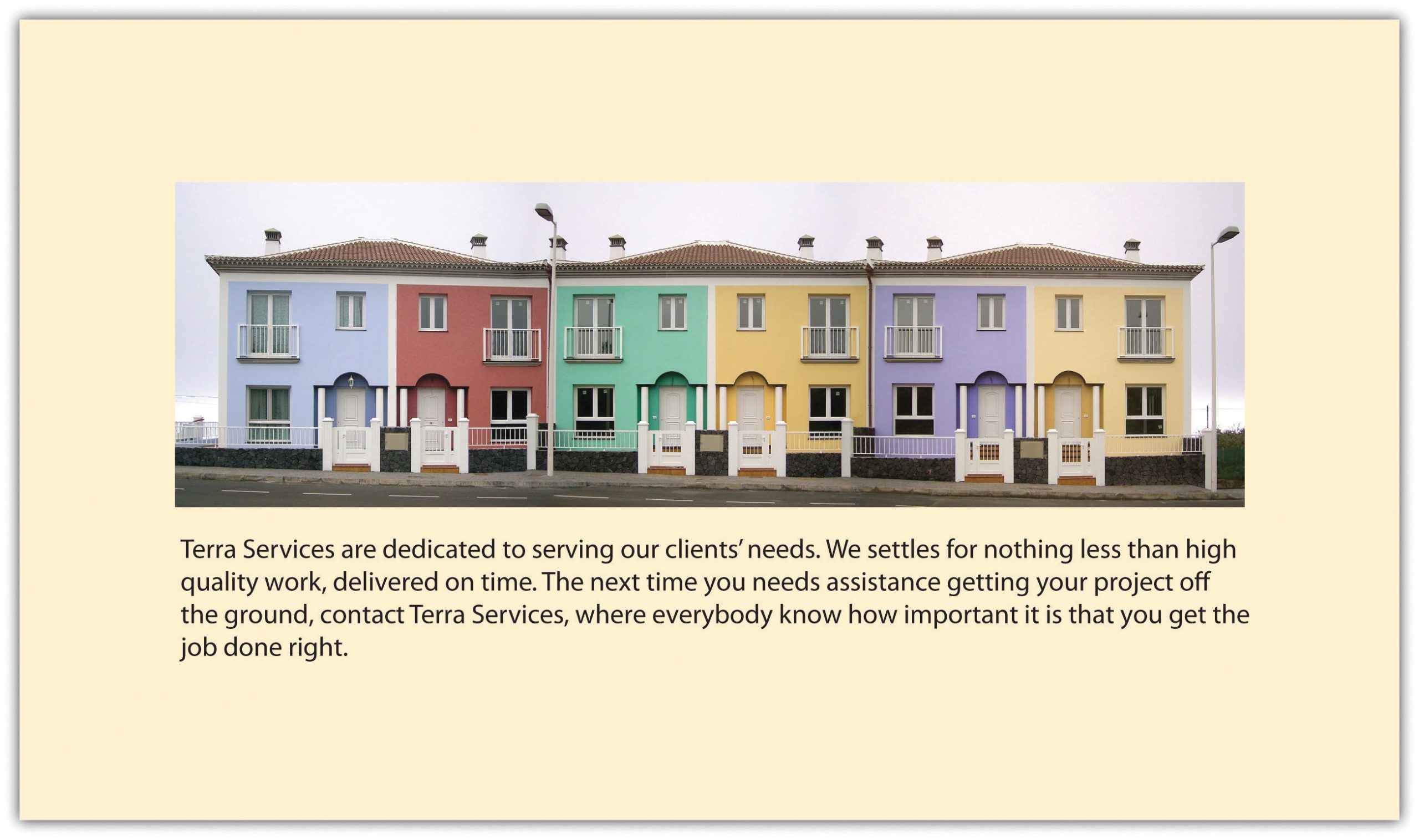 Imagine that you are a prospective client and that you saw this ad online. Would you call Terra Services to handle your next project? Probably not! Mistakes in subject-verb agreement can cost a company business. Paying careful attention to grammatical details ensures professionalism that clients will recognize and respect.

Use your knowledge of subject-verb agreement to write one of the following:

Be sure to include at least the following:

Write What Matters by [Author removed at request of original publisher] is licensed under a Creative Commons Attribution-NonCommercial-ShareAlike 4.0 International License, except where otherwise noted.