Exigence is a rhetorical concept that can help writers and readers think about why texts exist. You can use the concept to analyze what others’ texts are responding to and to more effectively identify the reasons why you might produce your own. Understanding exigence can lead to a better sense of audience and purpose, as well: When you know why a text exists, you will often have a clearer sense of whom it speaks to (audience) and what it seeks to do (purpose).

The rhetorical concept of exigence, sometimes called exigency, is attributed to rhetorical scholar Lloyd Bitzer. In his essay, “The Rhetorical Situation,” he identifies exigence as an important part of any rhetorical situation. Bitzer writes, exigence is “an imperfection marked by urgency … a thing which is other than it should be.” It is the thing, the situation, the problem, the imperfection, that moves writers to respond through language and rhetoric. Bitzer claims there can be numerous exigencies necessitating response in any given context but there is always a controlling exigency—one that is stronger than the others.[1] 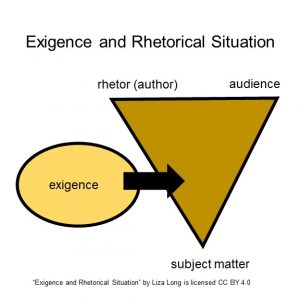 As John Mauk and John Metz explain in “Inventing Arguments:

An exigence may be something as direct and intense as a power outage, which might prompt an official to persuade everyone to ‘stay calm’ or to ‘assist those in need.’ An exigence may be more subtle or complex, like the discovery of a new virus, which might prompt medical officials to persuade the public how to change its behavior. Exigence is part of a situation. It is the critical component that makes people ask the hard questions: What is it? What caused it? What good is it? What are we going to do? What happened? What is going to happen?

Another way to think about the relationship between exigence and other elements of rhetoric (especially the purpose) is in terms of problem and solution: an exigence is a problem that demands a solution. All rhetorical situations are particular, inventive solutions to a pressing issue.

Some experts of rhetoric have pointed out the link between kairos, an appeal to timeliness, and exigence.[2] A conference speech might be a response to an invitation, for example, or a political speech might be proposing a certain policy in response to a recent act of terrorism. Or, a paper or speech might be prompted by something extraordinary that’s about to happen, if certain steps aren’t taken now, such as those related to climate change.

This chapter, “Exigence” by Joel Gladd, is remixed from “Exigence” by Justin Jory is licensed under a Creative Commons Attribution-NonCommercial 4.0 International License, except where otherwise noted.

Write What Matters by Joel Gladd is licensed under a Creative Commons Attribution-NonCommercial-ShareAlike 4.0 International License, except where otherwise noted.